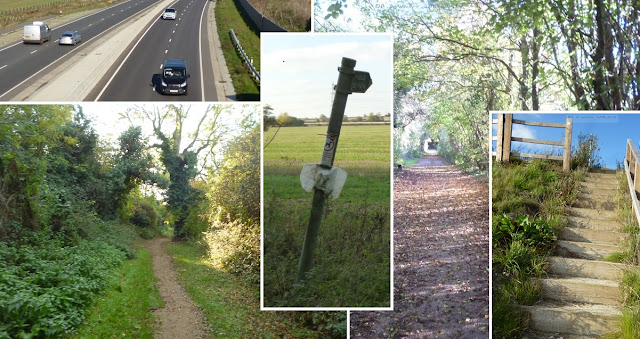 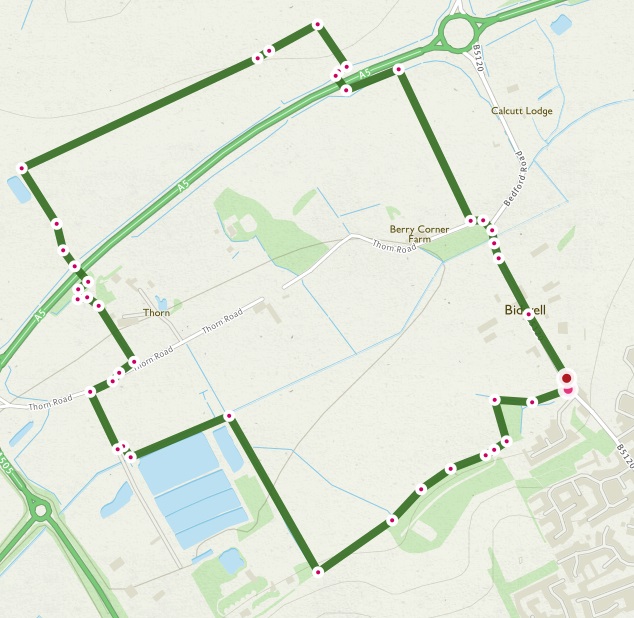 Several paths in the HRN2 development zone were stopped up as from 1st October 2018. Public Notice Bidwell. According to the notice, ‘this temporary closure is required to safely carry out construction work. The closure is expected to take place from 01 October 2018 for a period of six months to 01 April 2019’.

Having now walked around the alternative perimeter route, I can say that the vast majority of the way should appeal to walkers, mountain bikers and runners, although in one or two spots you might find your boots clagging up with mud if it's wet. 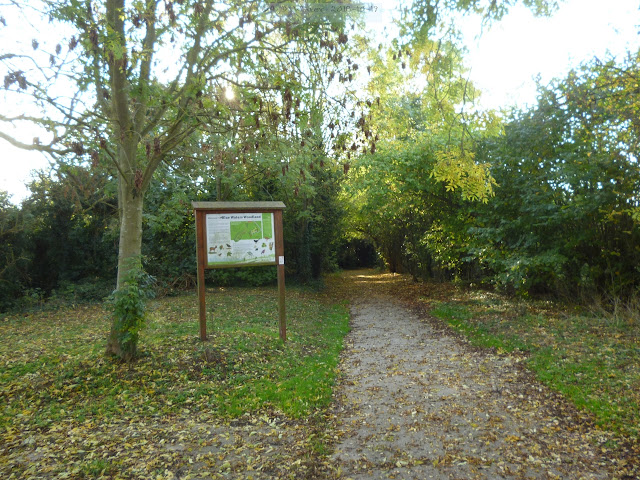 If you took the Chalk Pit edge, (X-P-Q-Y) head down to the eastern edge of the Sewerage Works to point Y. If you took the other route, turn north along the edge of the sewerage works. The route here has been fenced off on both sides to provide a path corridor.

About point Z on the map above, a pond has formed, and gulls are taking advantage of it. 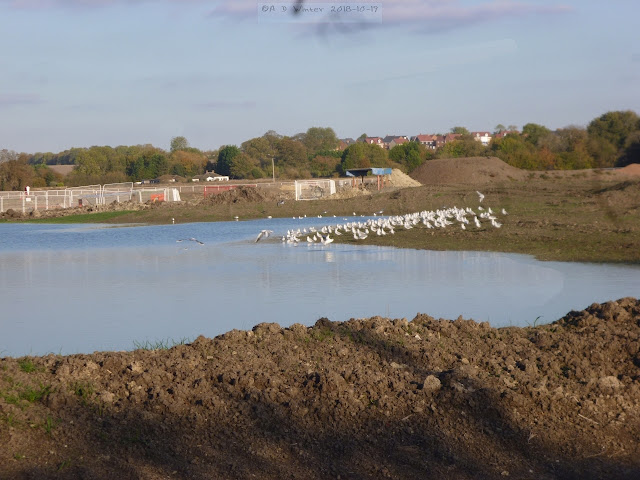 Follow the fenced and waymarked route north to the Thorn Road (Z-C-T). Head west to the pegasus crossing, then north over that crossing (T-S) 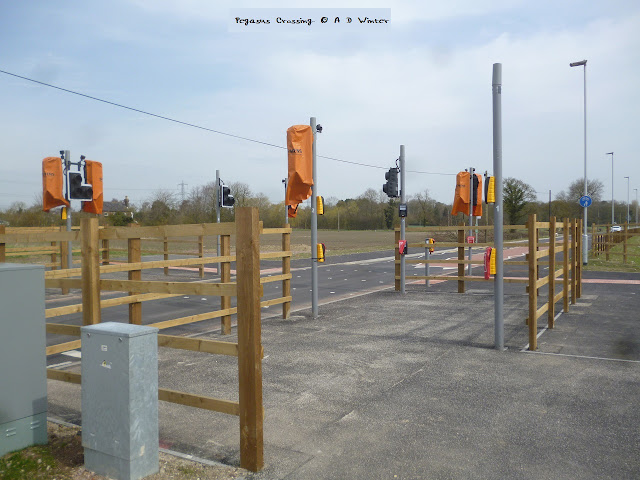 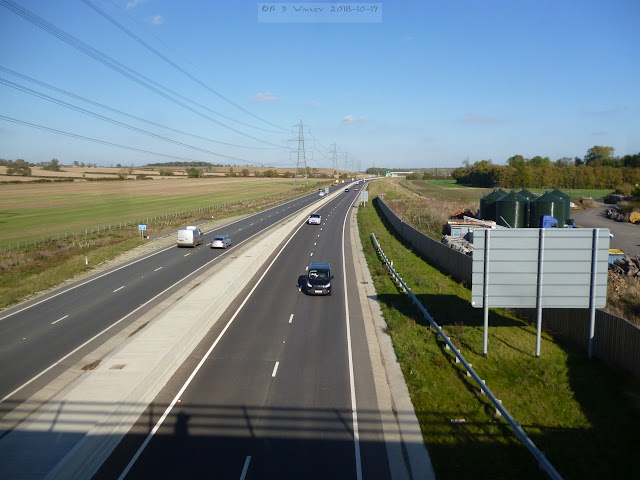 This northerly route takes you over the A5 dual carriageway on a new bridge. At a corner of the field ahead, turn west until you reach a waymarked post pointing you south, towards the next pedestrian bridge. 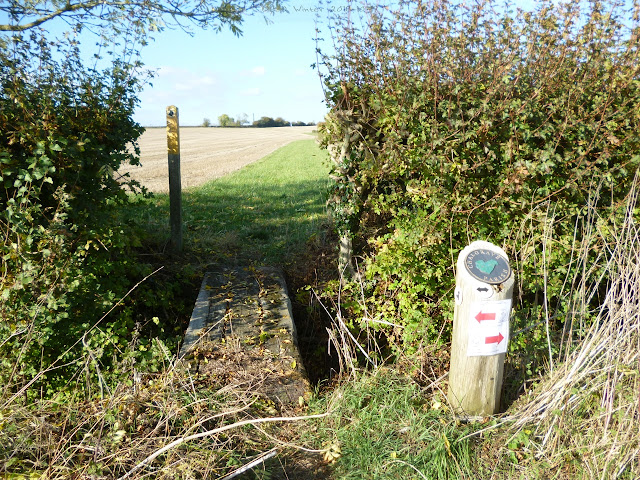 Path R-H-V. Once over the second A5 bridge, it might seem a bit perplexing where to go next, but confidently head down these steps south. 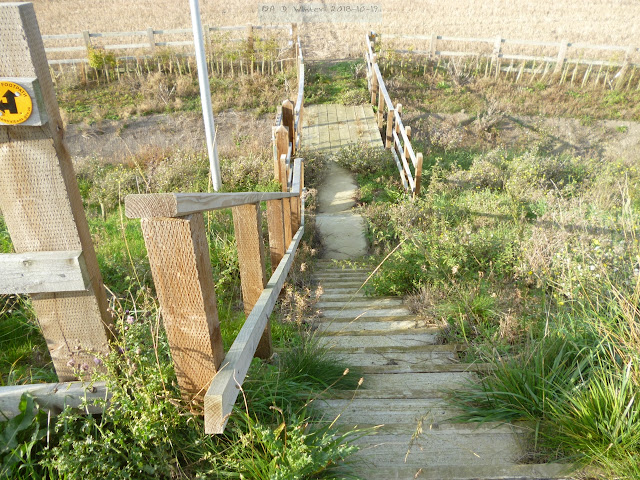 Path R-H-V.. Sharp left at the bottom along the fence line pictured on the right above, towards a waymarker. The waymarker then sends you south, down FP13 until you get to the Thorn Road. 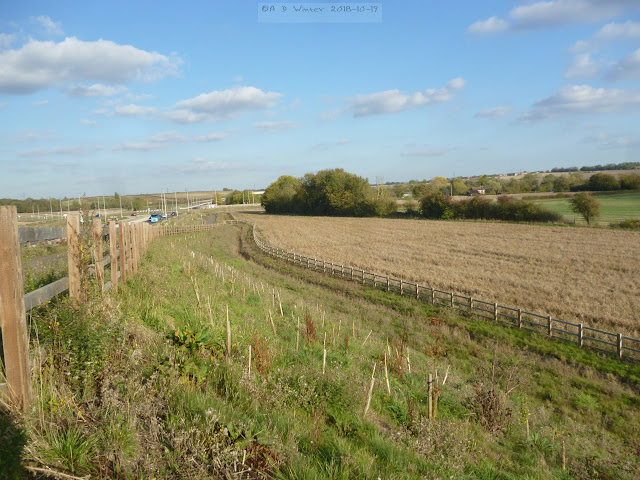 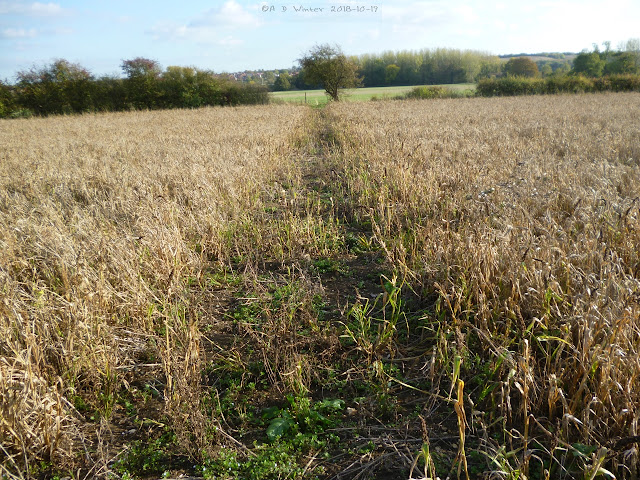 Once at the Thorn Road you need your wits about you as for now you have to go 2 tenths of a mile up Bedford Road, while there's no footpath and it's the national speed limit. And it doesn't help that cars can be turning from Bedford Road into Thorn Road rather quickly. All this should improve in time; a roundabout is due to be built in 2019.

The grass verges will have to do. Across the road from the footpath, on Bedford Road, the Ouzel Brook, known to many locals as The Washbrook in this area, flows under a bridge.

From here on you're on route V-W main road to take you back to the Red Lion car park.

Once the 40mph limit is reached, a public footpath is available. The Red Lion is up the road, on the right.

Footnote: Sad to report that a fallen tree on the concrete path, a vandalised noticeboard at Blue Waters woodland, two vandalised Public Notices on waymarkers were all reported to the appropriate people at CBC after my walk.😒


Other Walks By Alan Winter 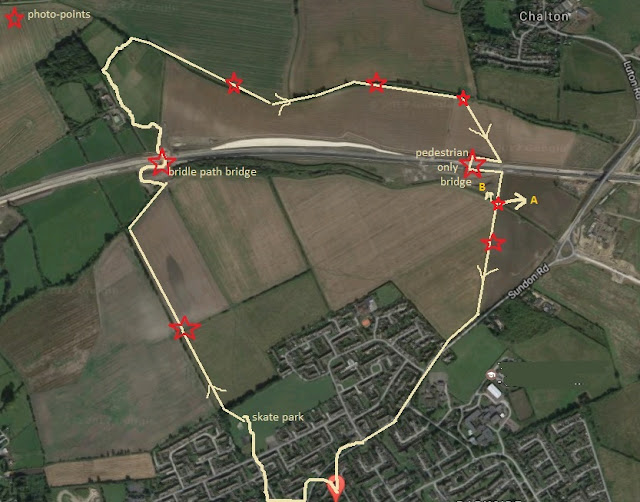 The man on the telly said this week that we all need to do more exercise, move more, and eat less because we're all getting obese. And the statistics for Central Bedfordshire also show that in Houghton Regis we're a little on the large size. So this afternoon saw me make the most of the excellent weather we're having at the moment, with a 90 minute jaunt around Tithe Farm and back home again.

I haven't walked this particular route in its entirety before, and I'm not the fastest of walkers, partly owing to the constant sciatic pain in my left leg. My right leg could walk for ever (possibly), but my left leg can't. Still, if I convince myself there is no pain and if my right leg can do it, so too can my left leg, then the walk is do-able (just about).

The old A5 is just a few weeks away from being diverted from its present course between Hockliffe and M1 junction 9 at Flamstead, to do a sharp easterly turn near Thorn and head instead towards the M1. No longer wi… 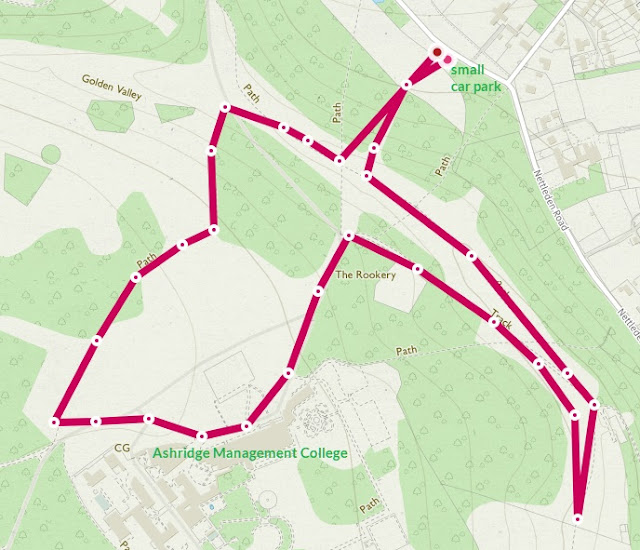 45 minutes walk. 3.26km. Small car park on Nettleden Road SP 99667 12808 If you want a longer walk try this 2.5 hour walk on OS Maps.
I popped up to Ashridge on Sunday morning with a friend to take a meander around the area near to the Ashridge Management Centre. In all my years of living in towns around the forest I can't believe I have never actually been in the valley to the east of the college. It was absolutely stunning.
All of these pictures enlarge with a tap/or click.


These cows were getting quite a trot on. Maybe it was their Sunday morning jog?

These pair of heads guard a main entrance door to the Management College. I know nothing about the stonework, but it's definitely crumbling on the north facing side.  There was a wedding group assembling outside so we left them to it.

I love the appearance of knarly and decaying wood. 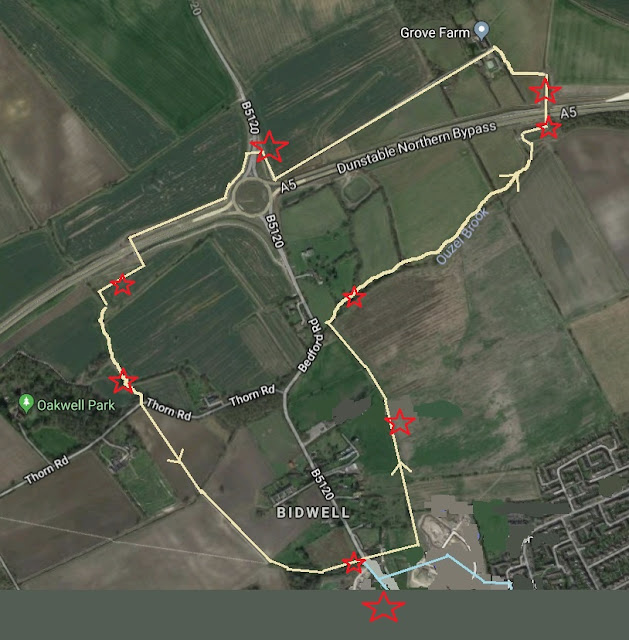 by Alan Winter
The brighter sunshine this afternoon beckoned me to venture out to get some much-needed walking exercise this afternoon. The first part of the walk involved walking into Houghton Regis town centre where I had optimistically arranged to meet a friend. As I went out the cold grabbed my back, and I started wishing I had put that extra fleece jacket on.

The first thing that struck me was how open the woodland was in front of my own house. The weeds et cetera normally hide a lot of the dumped rubbish, so, mental note to self to get in there with my litter picking stick later, and also to drag out some of the larger items for our Household Waste Services to hopefully take away later.

Meeting up in town, we went off down Bedford Road. Here I include a photo of the steps to Bidwell Hill, as they seem to hold fond memories for our older generations.

(All pictures can be enlarged by tapping or clicking them.)


After the Old Red Lion, and drawing level with the entrance to the Bauk…
Tweets by @alandwinter